First Gear: drive how you want your child to drive

Every parent's had that moment when their child picks up a bad word and decides the best time to experiment with it is in front of Grandma.

If they're picking up things like that when you've devoted years of your life to saying 'shoot' and 'oh fork' - how do you think they're influenced by your driving?

According to a survey by BoostApak, the average child spends nearly 7 hours a week in the car with their parents. In that time, they see and hear all the swerves and swears, beeps and bumps. As the sweet little sponges they are, how you drive has a big impact on their attitude to driving.

What your kids think of your driving

We asked 2 children to tell us how their parents drive. The poor mums and dads listened from their living room - and what they heard came as a bit of a shock.

We surveyed over 1,000 children about how their parents drive, to see how they pick up on bad habits in the car. We gave them a list of bad driving habits and asked them to select which ones their mums and dads have. These are the traits they chose: 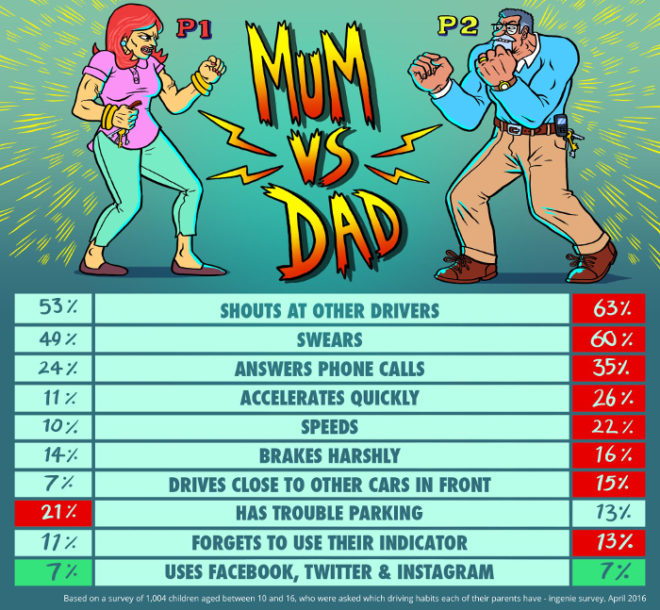 We can see that children tend to report more risky driving patterns from their dad. Mum might be prone to a few scrapes and some bad parking, but Dad is more likely to speed, get angry with other drivers and tailgate.

Children feel safer with Dad - despite his dangerous driving habits

We asked our study group which parent they feel safest with in the car and 52% said Dad, while only 44% said Mum.

While Mum's in no way innocent of any bad driving habits, it's worrying that children report feeling safer with their dad in the car despite his worse behaviour, suggesting they have a skewed idea of what safe driving is.

This is a big problem when they get to driving age: too many young drivers believe good driving means getting somewhere quickly, with lots of weaving and quick braking. In fact it's the opposite, and our study group of under-16s proves that children have a dangerous misconception of how they should drive in the future.

So, how do you drive? You might be more aware of those 'little' bad habits from now on. Your children certainly are.

Read more about setting a good driving example for your children.

ingenie is a black box car insurance brand.
We fit a black box in your car to assess your driving style. Drive well and you can earn big discounts at renewal.