An ingenie horror story: the tale of 7 ghostly cars

Ladies and Gentlemen, boys and girls...gather round, you're in for a real treat. Or perhaps a trick?

Our beloved Charlotte who works in our customer service team has literally been to HELL and back (several times) when it comes to cars, and in the true spirit of Halloween, we thought we'd share her horrors with our ingenie drivers.

Never has one person experienced such bad luck with motors - we're actually convinced she's being followed by some kind of evil omen: The Curse of the Car Catastrophes.

So, come and take a seat behind the wheel with Charlotte, if you dare. Here's a tale that will leave your bones and your engine rattling. You're in for one hell of a bumpy ride.

DISCLAIMER: No Charlotte's were harmed in the making of this horror story.

Moral of the horror story

So now you've survived this horrendous tale there's some key bits of advice for you to take away.

Read these and don't let them happen to you! Or else. 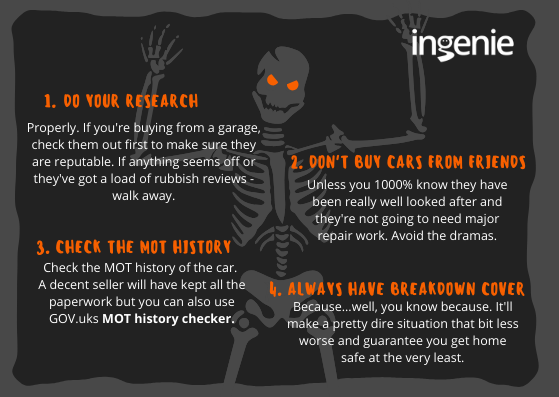 You have been warned.

Getting into the Halloween spirit? How about planning a spooky road trip to some of the UK's most haunted roads? Dooooo it.👻