On Saturday morning, I took my driving theory test.

There was a fair amount of pressure on me to pass the theory test first time (this stuff is technically my job) but I felt oddly calm about it.

Possibly because I'd already decided that I would fail.

I had put in quite a lot of work - ramping up last week with my poor boyfriend testing me every night - and I do write about driving every single day, so it's strange that I didn't feel more prepared.

I'm quite a nervous learner driver, so I think that had spilled over into my confidence with taking the theory test. 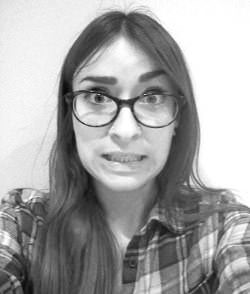 Saturday came and I double-checked I had my driving licence photocard, then set off. I knew from years of my friends taking their theories that the local test centre was quite hard to find (up a poorly labelled alley) so I left extra time.

I went up to the reception with 20 minutes to spare and signed in for my 'Car Theory Test'. I was asked for my licence and told to take a blue folder which explained the rules of the test - like no phones in the test room.

This is NOT a joke: you must must must must double-check you have it! One girl had sent her boyfriend home to get hers and was still waiting as her slot came and went.

Before I went into the test room, I was given a locker for all my stuff. Make sure you turn off your phone! A lady then checked behind my ears (no one warned me of this) to make sure I wasn't concealing any spy devices. Yep, people have really done that.

I went into the test room and sat at the computer I'd been pointed to. There was a short run-through of what would happen on the screen, and a few practice questions.

I found the questions OK, with only a few OMG moments. As you're going through, you can flag questions to return to if you're not sure. I flagged about 7, which scared me a bit as that's the maximum you're allowed to get wrong for a pass.

Use all your time for this bit - something might suddenly come back to you!

I tried to read every question really carefully, even if I instantly recognised it from practising online. I did the whole cycle of 50 questions about 10 times I think - you have 57 minutes so it's REALLY worth using the time for checking and checking again.

Before I clicked to end the test, I made sure I didn't have any 'unanswered' questions (because these are automatically marked as wrong!) and counted how many I thought I'd got right. I felt fairly good about it but thought it would be a close call.

I took the option to have a 3-minute break in between the multiple choice and the second bit, so I could rest my poor old eyes. I should point out here that I'm nearly a decade older than most of the people who were taking the test with me. Bit of a late starter at 25.

I'd been dreading this bit. I did the practice run (DO IT) and listened to the whole explanation of what I'd see and when to click.

I then did the 14 clips, one of which I got a zero for because I accidentally did a weird spasm of clicks, which I guess was interpreted as cheating.

In the pub on Friday, my mate had told me 'Just click every time you see a horse'. This actually turned out to be a good tip as one clip had a sign for a riding school, which I would have missed as a potential hazard otherwise.

Note: drinking the night before could slow your reactions - not great for hazard perception!

Please, PLEASE do some hazard perception practice online or with your instructor before your test. I had done a bit ages ago but didn't have time in the week before so I was really on edge for that part of the test. The videos aren't great quality so you need to be extra prepared.

It helped me to imagine that my driving instructor was next to me, reminding me what kind of hazards there might be in a particular kind of area. Thanks Pete, you've done yourself proud.

So you've probably guessed: I passed. I walked out of the room a bit annoyed by the hazard perception and thinking I'd failed. I got my stuff out of the locker and went to give the key back, trying to plan what I'd say to my colleagues when I got into work on Monday...

Then the guy at the desk said 'Well done Honor' and slid my results across the desk. It took me a few seconds to understand what that meant, but then I saw the word 'Congratulations' on the paper and realised I'd passed!

How I passed my theory test: 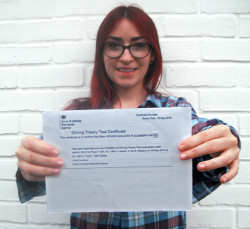 Find out what happened when I took my practical driving test.