This post is about the old driving test. If you're taking your test after 4 December 2017, you can find out more here.

Katey is our social media customer service lady - she's the person you'll usually be talking to on Facebook or Twitter.

Katey JUST passed her test (just like me!) and she happened to ace it in 1 go (nothing like me), so I asked her how she'd describe her driving test experience while it's still fresh in her mind. It went a little something like this:

How I prepared for my test

"Once I’d booked my test I upped my lessons to 3 or 4 a week instead of my usual 2. I spent a few days swotting up on the show me, tell me questions and watching loads of test day video clips on YouTube.

"I also looked up some possible test routes and Google Mapped my way through them to get an overview of the roads they might take me down. I had 2 lessons that week but I wasn’t able to practise any manoeuvres as the weather was so bad and it was getting darker a lot sooner.

"I still hadn’t looked under the bonnet as this point and was starting to worry that I wouldn’t learn all the parts/checks in time, so I dragged my instructor out in the rain with a torch and asked him to run through it with me. He was thrilled."

Just before the test

"Test day, I felt prepared. I had a 1-hour lesson before the test to try and reduce the pre-test nerves but unfortunately it didn't really help. My instructor asked me to do a reverse around a corner (which was one I thought I had in the bag) and I ended up miles from the kerb and my instructor basically told me to stop as I was getting nowhere.

"We then made our way straight to the test centre (with me nearly in tears) and my previous confidence had now disappeared. I just wanted to get out of the car.

"My instructor asked if I wanted to use the loo before the test and in my anxious state I said yes - despite not needing to go. BUT the test centre didn’t have a toilet on site, which my instructor did warn me about. Woops.

"We therefore had to search for a petrol station and park on double yellows. I ran in and shut the door, giving myself a mini pep talk: repeating out loud ‘You can do this Kate - get a grip.’

"I took a deep breath, then walked out and bumped straight into a lady who was waiting to use the toilet. It hit me that the reason she was staring at me like I was an absolute freak was that she’d obviously just heard me chanting to myself in the loo. Brilliant."

How the test went

"I pulled up outside the test centre and called my instructor over for the results. To my surprise, the examiner told me I’d passed! GET IN - although the victory was short-lived as she started to go through all my minors.

"My driving instructor congratulated me before driving me home and on reflection I realised that the whole thing wasn’t actually as bad as I thought it would be. Confidence is key, but more importantly: staying determined even if you think you’ve totally messed it up.

"I also think that coming across a few difficult scenarios on the test gave me the opportunity to show the examiner that I could keep calm and remain in control for real-life situations on the road. Though deep down I really just wanted to strangle that coach driver!" 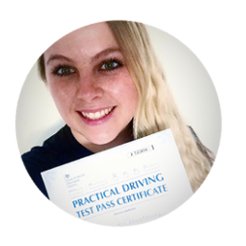 Try to straighten up your wheels when driving over speed bumps. My examiner thanked me before she got out the car for taking the speed bumps really carefully - she said it was a very pleasant and comfortable journey. 🙂

If you're in the market for a bit of balance, here's how I failed my first driving test.